“Don’t be scared to receive her in your heart
For she carries the Light that will change hearts.
Darkness will run away from millions of hearts
And the world will be different for generations to come.”

(March 19-Feast of St. Joseph)
When the Italian Jesuit Joseph Beschi wrote Thembavani, he might not have thought it would gain such a unique place in world literature: the only epic on Saint Joseph in any language and through it Tamil itself got the attention of the litterateurs of the world.

This uniqueness we can see in every aspect of Saint Joseph, the husband of Mary, foster father of Jesus and the patron of the universal Church. His is the most solemn feast after that of Mother Mary, yet he is the most ignored saint in many respects: there is least reference to him in the Gospels, not even one word of him is recorded anywhere, he is the most sidelined in liturgical celebrations.

But Saint Joseph whose solemn feast is celebrated on March 19 the world over has got that uniquely glorious place in divine and human history: caretaker of God’s own family in Nazareth where Jesus grew up. He carried out his responsibility so well that he has become the best father and best model for all fathers to emulate. Literally, he did earn bread for his family by the sweat of his own brow doing the humble manual labour carpentry.

Those who look down on manual labour can learn a lesson or two from Saint Joseph, especially where caste thinking has made manual labour a despicable act though it is the most essential for human survival. Joseph the royal descendent of David spent his days with hammer, chisel and the measuring rod to feed God’s own family. When we go to the big marts and malls we just forget about the labored hands behind each product in that ac hall. Remember, Joseph was from a royal family yet he did manual labour and gave it a royal touch.

Pope Francis called Saint Joseph a strong man when he addressed the families in Philippines and he indeed is the strongest man when he accepted a pregnant Mary against all the social mores and attitudes. Only the most courageous man can do this because he followed God’s dream as communicated to him, whether it was going to Egypt to save Jesus and Mary or to come back from there to settle in Nazareth, he did it with unusual inner strength because he was a ‘just’ man as the Gospels say.

By caring God’s own family, the Holy Family of Nazareth, Saint Joseph became the patron of all the human families all over the world. He inspires every father to care his family with sensitive understanding and courageous love but silently without being vociferous about it.

Though Joseph is not depicted as speaking anything but his actions speak louder than words, his silent toil and care for his child and wife speak volumes to all the fathers all over the world. If Saint Joseph did not care for his family, we would have definitely lost Jesus for us, it is he who took him by the hand and taught the tiny tot to walk the way of life. It is the bread he earned that fed the Redeemer of humankind and therefore the bread Joseph earned was the most valuable.

So if today Joseph is the name that the largest number of people are having, then there is no wonder. Happy feast to all the Josephs all over the world and to all the institutions that bear his name. And he has inspired me to give the following poetic expression:

Why did this carpenter follow dreams?
He turned dream his measuring rod
To measure and chisel new shapes and forms
For humankind for all eternity.

He knew his betrothed had what he did not want
But then dream dropped by for a chat:
“Don’t be scared to receive her in your heart
For she carries the Light that will change hearts.
Darkness will run away from millions of hearts
And the world will be different for generations to come.”

He said Amen to his dream
And courage flowed down like a stream
And when he woke up from his sleep
He found her new attired in human dignity
So he told all men of all ages
To wake up from their sleep to see their women
In a new light
But if they are asleep and drowsy
They will see her as a mere dross
And will never follow voice of their dream.
When Bethlehem heard Light’s first scream
Many dreams blossomed in many forlorn hearts
But Herod’s nightmare this carpenter did not know
Except when swords fell on the babes.

When blood seeped with mother’s tears
Nazareth’s carpenter saw again a dream.
He was on his way to Egypt on a donkey
Holding the hand of trust.
When he returned to chisel and hammer
To change the wood into bread for his home
The little fellow stood and watched
How his father brings out beauty from nowhere
When chisel, hammer and the measuring rod
Hold their hands with jubilant hearts.
And the carpenter said to his soul in silence:
Oh God, I followed your dream
Now I entrust your Dream for man
Into your hands
So that nightmares may be exorcised
From the hearts of your people forever!” 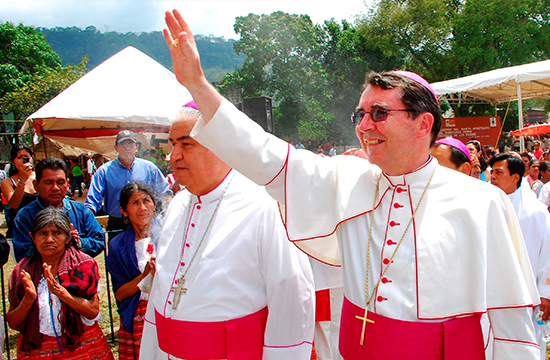 Bangladesh tea workers: A legacy of neglect and servitude